Where is Spencer Cade? 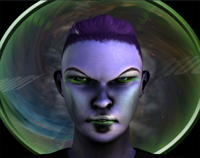 This thing showed up and was looking for Spencer Cade.  This is what I witnessed.  Do you know where he is?

"After a daunting removal, the Commander was thrown onto a cold concrete slab and told to pray to whatever deity he saw fit. Soon afterward, an unknown figure, with purplish skin, walked towards the Commander. As this figure slightly tilted its head downward, the Commander could make out its long sinister mouth and its two slits exhibiting its darkened eyes. For the first time after numerous torture sessions, the Commander felt a cold chill run down his back as he lay there frozen with fear. The five-foot-nine figure, dressed in solid black, stood there with a killer's stare. The Commander spoke, "Who are you?

The figure responded, "Where is Spencer Cade?

"As I keep saying respectfully, I don't know."

The figure lifted its dark leathery hand to wave one finger from side to side.

In a more whimpering voice, the Commander simply replied, "What? I don't know."

The figure gave no verbal response but instead shed one bloody tear from its right eye. The tear led its way down the figure's face and fell onto the Commander's body and absorbed into his skin.

Soon after, the Commander let out a terrifying scream that echoed off the chamber walls filling the ears of everyone within a two-hundred-yard radius. The Commander's eyes turned backward within his skull as his entire body locked up as stiff as a metal beam. Within a matter of seconds, the Commander's body disintegrated into a humanoid silhouette of ashes as an orb emerged and was drawn into this figure's chest.

Without noise, the emotionless model turned around and left.

Neither military personnel nor prisoners said a word.

Excerpt from the sci-fi novel sequel "The Infinite Evolution - Acceptance."